The Aadhar is a unique number which issued to each and every citizen of India by the Indian government. The Aadhar can be used in many places as an identity proof i.e Railway ticketing, applying new connection for LPG gas cylinder etc.

Apart from that, there are many benefits of Aadhar card, some are mentioned below :

1. Aadhar is a unique number so it can’t be duplicated.

2. Being a unique number Aadhar is allotted to each and every citizen of India so that every Indian citizen has a unique identification number. 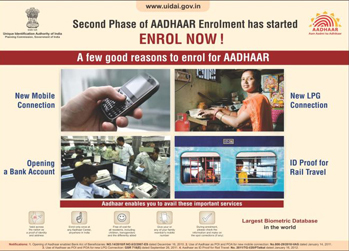 4. Aadhar is also can be used to benefit the services of banking facilities.

5. Having finger prints and eye-scan on Aadhar card,  it eliminates the threat of fraud and any illegal activity.

8. Aadhar can be used as an identity proof in many affairs i.e. Applying for passport, opening a new account in a bank, booking railway tickets, booking airline tickets etc. and many other places.

9. For the rural areas the Indian government will provide some special services to the holders of the Aadhar card.

10. Aadhar is beneficiary weapon for a poor man of India.

So, the Aadhar is a important and a beneficial weapon for each and every citizen of India issued by the Government of India.